Bryan Singer confirmed today via Twitter that Hugh Jackman has signed on to reprise his role as Wolverine. Jackman is the third alum from the original X-Men trilogy, joining Patrick Stewart and Sir Ian McKellen. As to the extent of his role is at this point unknown, hopefully it will be longer than the 10 seconds in X-Men: First Class. 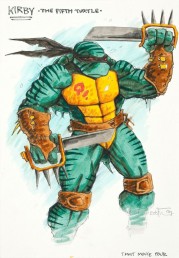 No this is not the reboot that Michael Bay is working on but rather a sequel to 1993’s TMNT.  For most readers that do not remember it is the one where they went back in time to Japan.  Yep, I don’t remember the movie either, but it was the lowest grossing in the series ( #1535 all time, #34 of the year).  After the disappointment of TMNT III the powers to be decided to change things up.  Which brings us to the pic on the left.  Ladies and gentleman I present to you Kirby – The Fifth Turtle. This is concept art from the now, thank goodness, defunct fourth film. I do have to admit he kind of looks cool but come on Kirby?  Kirby the Ninja Turtle.  It doesn’t even sound right when you name them off.  Leonardo, Michelangelo, Donatello, Raphael and Kirby.  But enough of my rambling, go to ScreenRant for more on this and take a look at some more of the concept art for the film.

An Unexpected Journey is the start of a new trilogy based on the J. R. R. Tolkien book “There and Back Again” directed by Peter Jackson.  Now before I start my review I have never read any of the books.  Before Lord of the Rings came out my only experience with Tolkien was the 1977 cartoon “The Hobbit”  and Leonard Nimoy’s “The Ballad of Bilbo Baggins”

That has to be Nimoy’s worst video ever!! Sorry, back to the review. I personally enjoyed the movie and would definitely see it again but on an IMAX screen.  I have read many reviews that have stated that it is a slow-paced movie, however I did not find that to be true.  The movie had a very nice flow to it, and kept me entertained the entire time.  The main group that you see in the movie are Gandalf, Bilbo and thirteen dwarves, which after each skirmish Gandalf is seen counting to make sure all are present.  Some of the cast from the Lord of the Rings trilogy(Saruman, Frodo, Old Bilbo, Elrond and Galadriel) have returned as well making the familiar faces a nice blend with the new ones.

There were a few spots that I saw where the special effects stood out and did not look as clean as it should for a movie of this caliber.  The biggest one was during the opening prologue, but the rest of the film was aesthetically pleasing with rolling landscapes in both the real and digital world.  The 3D seemed to be above average than with other films which gave depth to the beauty of Tolkien’s Middle Earth.  There was however a “song” while the dwarves were cleaning dishes that I felt was really unnecessary.  I personally am not the type to like “songs” in movies, feels a little too much like an older Disney movie to me.

There are more sorcerers in this film as well.  Along with Gandalf the Grey and Saruman the White, there are two Blue sorcerer’s and Radagast the Brown.  Radagast is more in touch with nature than anything or anyone else and according to Saruman, has a “mushroom” habit.  He has a sled pulled by Might Grey Jack Rabbits and has birds living in his hair which have left him a poop streak down the side of his face.  I believe he is just a mention in the book but has at least 20 minutes of screen time in the film.

The fight scenes were decent enough, there is not a character like Legolas in the group yet so there are no jaw dropping moments but fun none the less. I don’t want to spoil anything but one of my favorite creatures from the Return of the King has come back a the end of the movie.  Gollum was also just as crazy/sweet as in Lord of the Rings and the FX department has improved their game on making him more realistic.  There is also a closeup of Smaug’s eye that was very impressive.

A friend of mine asked if they could see the movie without seeing the other movies.  If at all possible I would at least take a look at Fellowship of the Ring so you can be familiar with the returning characters as well as some events that are mentioned from the Fellowship’s prologue, plus the first Shire scenes in The Hobbit and The Fellowship of the Ring is within an hour or two of each other.

I did find out afterwards that even though it was filmed at 48 fps ( Jackson’s way to future proof the series) our local theater showed it in 24 fps so I did not experience any headaches like some movie goers have reported.   Thanks for reading and when you get a chance check out the Hobbit and let me know what you think.

Since the release of Tron: Legacy Disney had been promising a sequel, which until now has been a slow-moving process. According to The Hollywood Reporter Disney’s new head, Alan Horn, announces that Jesse Wigutow was hired to rewrite the script penned by  David DiGilio (Eight Below) a year ago.   Those not familiar with Jesse Wigutow, it should be mentioned that he is a known commodity in Disney, having worked on Eragon, Peter and the Starcatcher and even the Crow reboot.

Although Joseph Kosinski is attached to direct, there is no confirmation of Jeff Bridges and Olivia Wilde reprising their roles.